It's getting Insane but let's stay hand in hand 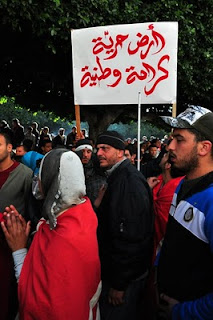 As we can see it's a total CHAOS but what's the real cause of this CHOAS ?
who's behind all this misunderstandings happening between people ?propaganda on Facebook and other websites is helping certain people to to achieve their filthy goals ...  i just want to say to my co-citizens stay strong and hand in hand to overcome this hard time keep fighting for your rights and don't beleive everything posted on facebook last sunday started a march from "manzel bou zayen" in the south of Tunisia to reached the capital "Tunis"  on monday morning  The militia of the ex-president of Tunisia is still  trying to sow terror among citizens but it's using other Technics now, they are making plays and recording them and putting them on Facebook to make people hate each other and to encourage  the idea of regionalism and even worst than that so please please my co-citizens be aware of what's going on , the militia want us to lose what we just gained so please don't make fun or hate your fellow citizens because in the end we are ALL TUNISIANi want to talk about another thing which is don't judge others unless you know enough about them all i can see on Facebook is : "contre Rached ghannouchi" (against Rached ghannouchi) or " contre Moncef marzzouki " (against Moncef marzzouki ) or Hama hammi (they claim that he's atheist or whatever) People you are talking about persons who  are planing to be candidates in the next presidential election , they aren't whoever guys i advice you to document yourselves and to read and watch what you can to make the right decision , make your own decision don't just follow others !! i'll leave you with few links
link 1
link 2
link 3
link 4
link 5
link 6
link 7
link 8

thats the links i have for now  when you read  enough information and watch videos i mean the whole video not just a part  then you'll have the right to decide who you are going to choose i have faith in you guys and i repeate it "don't let us lose what we just gained "
Publié par thesleeplesswanderer à 17:52